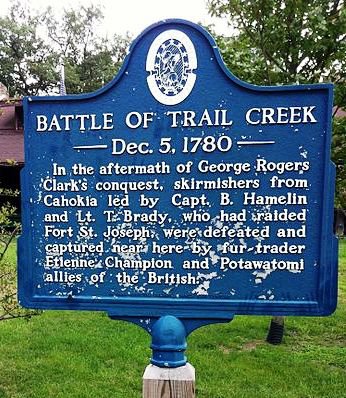 Long before Trail Creek became an incorporated town in 1924, the small village of 150 people was better known as "Roeskeyville". The name was first used in 1880 by Harry H. Francis, then publisher and editor of the Michigan City Dispatch.

The year 1831 marked the completion of the Michigan Road and the opening of Northwest Indiana to the early settlers. The "Road", in some places a little more than a swath through the forest, began at Madison on the Ohio River, wound its way North through Connersville, Indianapolis, Fort Wayne, South Bend, and eventually terminated in Michigan City. The present day Michigan Boulevard marks the route of this early road and is now the North Boundary of the Town of Trail Creek.

In 1834, John Walker built a dam across Trail Creek and thus acquired the first water rights in La Porte County. Shortly thereafter he built the first sawmill in the village, situated approximately 150 yards east of the present bridge over the Trail Creek on the south side of the road. The mill was eventually sold to James Scott who transformed it into a thriving flour mill. Ownership of the mill passed through many hands until 1880, when Denton Miller, the current owner sold the mill and property to a pair of German immigrants, Christopher (1847-1912) and August (1839-1924) Roeske. The Roeske brothers had emigrated, along with their parents, from Mecklenberg, Germany in 1864, eventually settling in Michigan Township, (two other Roeske brothers, Michael and Theodore, are mentioned briefly in some written histories, however their exact involvement in their brothers ventures is unknown).

After acquiring the Walker Mill and 225 acres of Denton Millers farm, the brothers constructed a larger flour mill, named after themselves, adjacent to the water source that powered the original Walker Mill. The lake formed by the impounded waters of the creek extended from Michigan Boulevard, south to within one hundred yards of the present Highway 20. The mill was a financial success, producing flour at the rate of 120 barrels a day. This, however, was not to be the end of the brothers success.

A vast deposit of clay was found on the east bank of Trail Creek and two brick plants with kilns and brick forming machinery were constructed by the Roeske's, thus creating the Roeske Brick Yards. The site of the brick factories is now occupied by the Michigan City Fish and Game Club and the lake adjacent to the clubhouse marks the site of the clay pit. Two key elements for further development of the area were now in place, a thriving industry and plant producing economical building materials.

Of interest to local residents are the two still standing homes of August and Christopher Roeske, both constructed of Roeske Brick. The August Roeske home is located at the southwest corner of Johnson Road and Michigan Boulevard. The Christopher Roeske home is located at the Southeast corner of Martin Drive and Michigan Boulevard. The original Christopher Roeske farmhouse was located on a tract of land in the approximate area of the Present Willow Court. A two story General Store and Inn was located at the Southeast corner of Johnson Road and Michigan Boulevard. It was managed by Mrs. August Mathias, a widow, who later married Christopher Roeske. Her son, William Mathias and other family members were actively associated with the operation of the flour mill and brick plant. The late Clarence Monahan, one of the founders of Trail Creek, and an early settler, recalled that as a boy he had often seen bands of Indians come up to the store to trade and camp for a few days on the banks of Trail Creek. The Inn, unfortunately, was razed in 1939.

In addition to these early residential settlements, the Michigan Township School, known as the "Roeske School" was located on a one acre site donated to the township by the Roeske Family. It was located on the property immediately east of the Sand Trap Bar on Michigan Blvd.

In the fall of 1923, the idea to incorporate certain sections of Michigan Township into a town was brought forth by Mr. Joseph P. Sterling (at the time residing at 116 South Roeske Avenue) in an effort to avoid annexation to Michigan City and the subsequent taxes that would be levied against landholders in the area. Mr. Sterling, in turn, proposed the idea to Mr. Clarence Monahan and to Mr. Lucius M. Harding.

A Meeting was held at the Roeske Schoolhouse to determine what action was to be taken to incorporate. It was decided by the residents who attended the meeting to name the section. Mr. Monahan spoke of the historical setting along Trail Creek, it being the hunting ground of the Pottawattamie Indians, and also the value the Roeske brothers placed on it. Discussions followed by members present and they finally decided to adopt the name, "Trail Creek".

Three trustees for First, Second and Third Wards were nominated. A Clerk-Treasurer and Town Marshall were also nominated. Elections were conducted March 18, 1924 in the ?Harding Garage and the first officers of Trail Creek were declared elected.

Miss Mary Monahan, now deceased, was quoted briefly about her home and surrounding property in a 1974 conversation:

"...In 1902, my father, Clarence Monahan, purchased this property and on the opposite side of the road a cherry orchard of eleven hundred trees and berry acreage".

The Monohan home still stands at 203 Johnson road. In early 1924, shortly after incorporation, these 35 acres were subdivided for Miss Monahan by Rev. Donald Ford. This area, bound by Greenwood Ave on the north, Johnson Road on the east, Whipporwill Ave on the south and Meadowlark Lane on the west was known as the "Orchard Park Subdivision". Characterized by its winding streets and unique platting of homes, this area became the first developed land in the new Town of Trail Creek.